TOGETHER FOR SAFER ROADS ANNUAL SUMMIT

VisionTrack is taking a leading role in road safety in the US through our partnership with global NGO, Together for Safer Roads (TSR). Our senior management team was recently in New York City for TSR’s annual meeting. As a key partner and the sponsor of the event, we share and support their focus on Vision Zero and eliminating the 40,000+ deaths that occur from traffic crashes on US roadways each year.

Vision Zero is a strategy, first implemented in Sweden in the 1990s, to cut all traffic fatalities and severe injuries, while increasing safe, healthy, equitable mobility for all. It has proved successful throughout Europe and has been gaining momentum across North America since 2014. More than 45 US communities have since committed to Vision Zero, but to date, many cities have yet to replicate the steady reduction in traffic deaths seen on European roads.

According to figures from National Highway Traffic Safety Administration (NHTSA), US traffic fatalities were up more than 10% in 2021, and through the first three months of 2022, were up another 7%. This included pedestrian and cyclist fatalities up 13% and 5% respectively, while crashes involving at least one large truck were up 13%, reversing the trend seen in 2020. In fact, Los Angeles had the highest annual total of traffic deaths in nearly two decades, despite making a commitment in 2015 to end them by 2025.

While positive results are not yet universal, this has not diminished the determination of a growing number of US cities to save lives. This year alone, New York, Seattle and Phoenix have committed multi-million-dollar funding for road safety, while El Paso and Stamford become the latest cities to adopt Vision Zero. Meanwhile, the US Department of Transportation announced the availability of $1 billion for local communities to ensure safe streets and roads for all.

VisionTrack is already contributing to these efforts by providing advanced video-enabled solutions to TSR’s Truck of the Future pilot program, which aims to eliminate collisions between HGVs and other road users through enhanced driver visibility. The objective of this initiative is to replicate the success of London’s Direct Vision Standard (DVS) scheme – introduced in 2021 by TfL – which has helped reduce serious injuries by 64% in the first year when compared to 2017 levels. Through Truck of the Future, we are supporting technology trials with some of the largest fleet operations in the US and Mexico including NYC DCAS, UPS, AB InBev and Republic Services.

As part of our partnership agreement with TSR, we are also participating in a series of high-profile events over the coming months designed to celebrate road safety commitment; provide guidance on fleet risk and collision prevention; and develop industry-leading projects. Here are some of the key highlights from our week in New York:

The Concordia Annual Summit – a global affairs forum that examines the most pressing global challenges to identify avenues for collaboration – was running alongside the UN General Assembly. High-profile speakers at the event included First Lady Jill Biden, former British PM Tony Blair, New York Mayor Eric Adams and New York Governor Kathy Hochul, as well as a host of other heads of state and leaders from the private and NGO sectors.

Richard Kent spoke at a roundtable hosted by TSR on the topic of distracted driving. He discussed how AI and Computer Vision is helping cut road deaths and serious injuries in the UK, and how this same approach could be used by fleets in the US to achieve similar safety results.

The prelude to Together for Safer Roads Annual Meeting and a ceremony for the Annual Global Vision Zero Awards. In particular, the event celebrated the contribution New York City Mayor Eric Adams is making to road safety. He received the Global Vision Zero Leadership Award from TSR and presented by VisionTrack for the crucial role he played in securing more than $900 million in funding to tackle the city’s traffic violence crisis and deliver a safer, healthier, and greener city for all New Yorkers.

Speaking at the award ceremony, Charles Morriston, VisionTrack’s Head of Global Services, described the historic investment as a “game-changer”, which is tackling the crisis head-on and putting New York at the forefront of road safety both nationally and internationally. He went on to say that it will: “Enable the city to introduce unique initiatives that help better protect cyclists, speed up public transportation and reclaim street space for pedestrians.”

City of Madison Fleet Superintendent Mahanth Joishy was also honoured with the Lenin Fierro Vision Zero Fleet Advocacy Award. He accepted the accolade on behalf of the city for its impactful efforts towards reducing fleet and traffic collisions in the community.

VisionTrack’s Charles Morriston, Richard Kent and Matthew Ison (Head of Sales – North America), were involved in a number of panel sessions throughout the day. They discussed a range of topics such as distracted driving, DVS standard, the use of technology to cut road deaths and other innovations in road and pedestrian safety and vehicle design. Other speakers and presenters included former President of General Motors International Steve Kiefer, chairman and founder of      the Kiefer Foundation; Al Cook from PepsiCo; Keith Kerman and Eric Richardson from DCAS; and Jim Olsen from Republic Services. 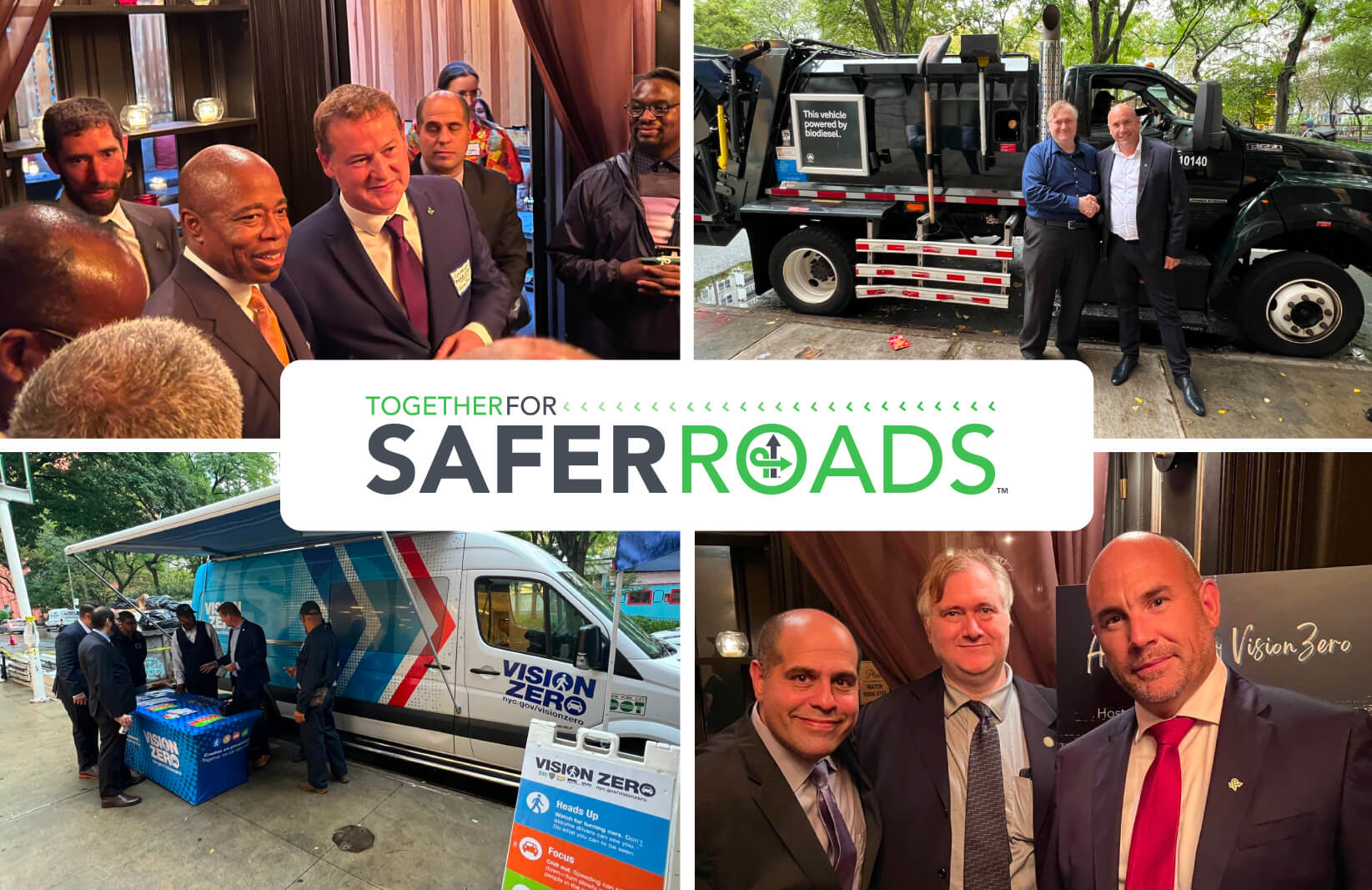