Putting aside a fourth place finish on Saturday, Brookes won both races on Sunday in spectacular style to secure the title, adding to the one he secured in 2015 and giving Penrith-based Paul Bird Motorsport its eighth BSB title.

The first race on Sunday saw Brookes take the lead at the third corner of the opening lap on his factory-supported VisionTrack Ducati Panigale V4R, from where he opened up a gap over the rest of the field and went on to take his fourth win of the season, ahead of Jason O’Halloran in second and Iddon in third.

In the final race, Brookes and Iddon started from second and fourth on the grid respectively, with Brookes quickly taking the lead. Despite extreme pressure from both Tarran Mackenzie and his teammate O’Halloran, Brookes swept to a remarkable 54th career win, clinching the title in the process. “That went to plan and congratulations to Josh who rode impeccably under such pressure,” said the team’s owner, Paul Bird. “He never buckled at all and he deserves the championship, I’m just glad he got out of bed the right side today!

“Well done to Christian too, he’s been a pleasure to work with this season and third in the final standings is a great achievement on his first year in the team.”

Simon Marsh, VisionTrack’s Managing Director, added “Huge congratulations are due to the entire VisionTrack Ducati team who put in a tremendous performance throughout the season, and topped it off by winning the championship. Everyone at VisionTrack is delighted with Josh and Christian’s performances.” 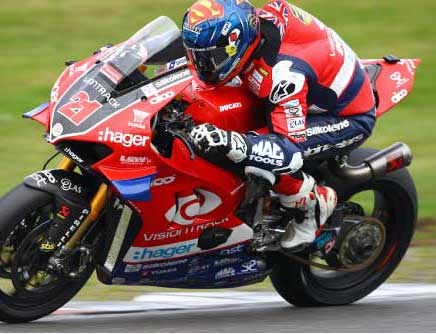